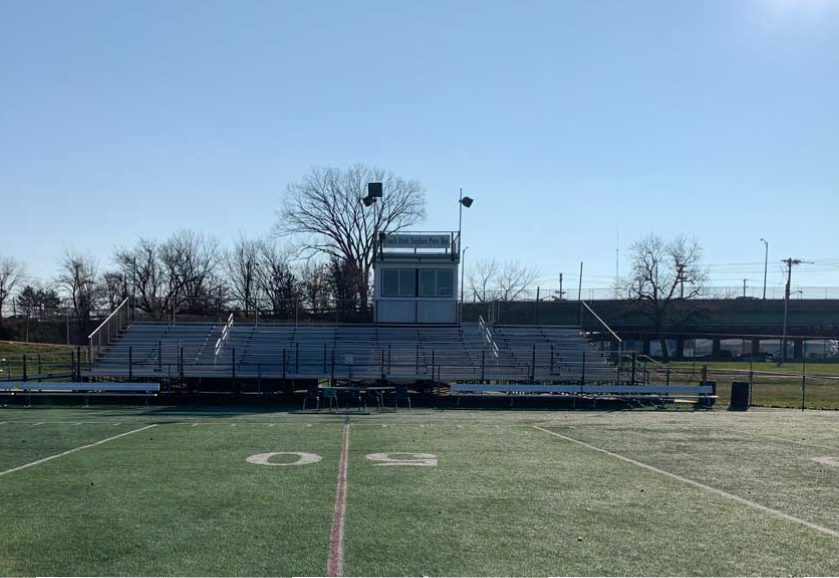 Camden Catholic High School had an older stadium sound system that was pieced together over the years and improperly installed.  The system was down to one functioning loudspeaker and with a playoff game coming up and the school hosting the Thanksgiving game, a new, reliable system was needed.

We designed a press box based system which kept costs reasonable while still providing coverage for the entire stadium.  We repurposed an existing loudspeaker as well as one of the wireless microphones.

The new sound system provides coverage for the entire stadium and is simple to operate.   The new equipment rack freed up counter space and allows the system to be locked when not in use. 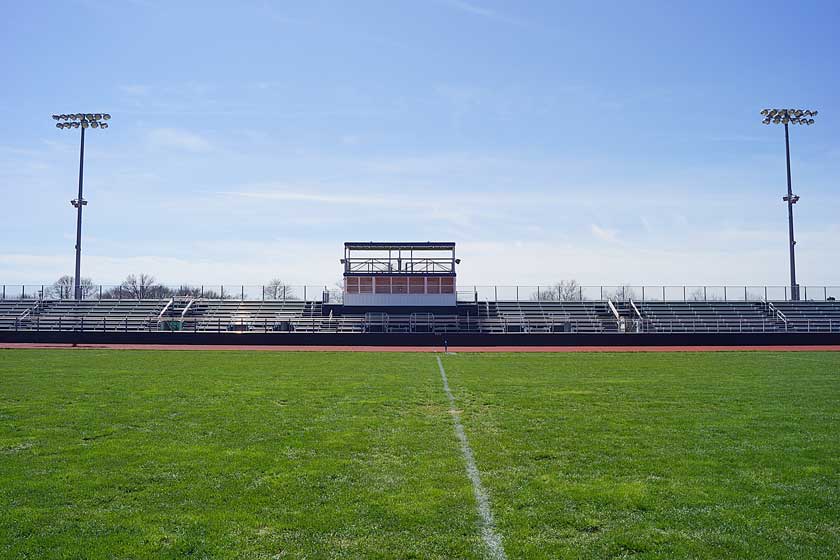 The new sound system had to provide sound for the entire stadium, which included new bleachers that are much wider than the previous set.  Additionally, the school wanted to eliminate renting equipment for graduation and needed a system that could provide sound reinforcement for this event.

The new sound system, which was used for the 50th-anniversary celebration, provides high-quality speech and music reinforcement for the entire stadium.  The iPad control and field jacks allow the staff to run the sound for graduation without having to rent a system. 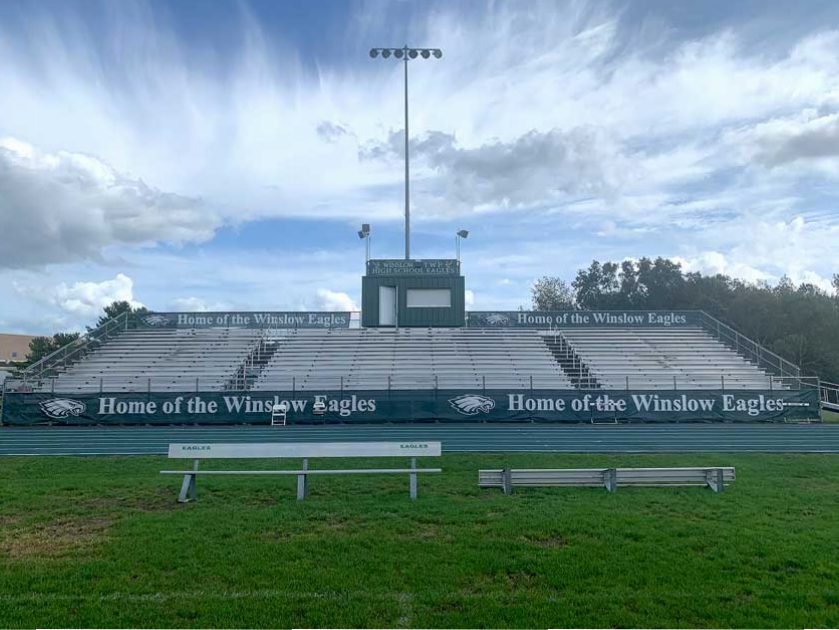 Winslow High School needed their stadium sound system upgraded to provide better coverage, including on the field and in the visitor’s stand, as well as new amplifiers and head-end equipment.

The new sound system has been a huge improvement and with the wireless microphone for the ref, it adds a new element to the games. 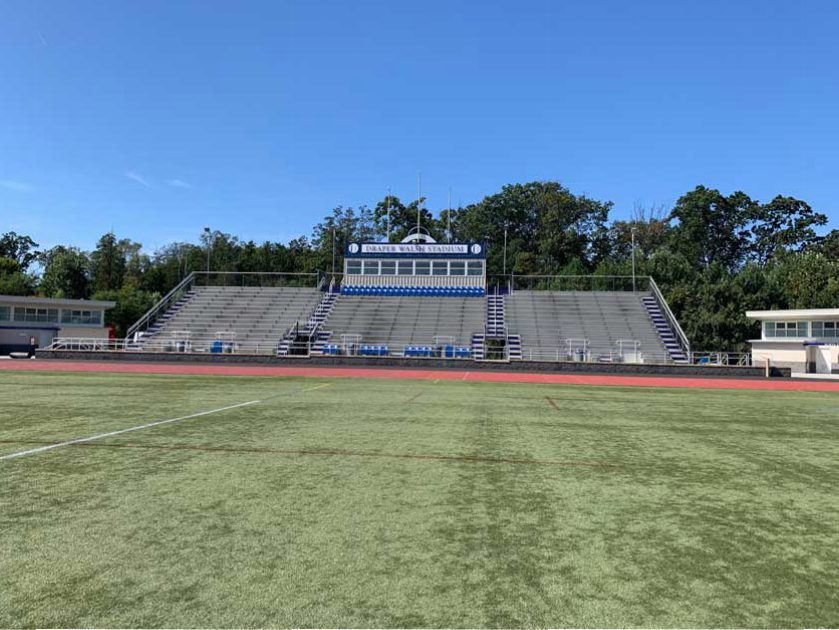 Immaculata University’s Draper Walsh Stadium needed an upgrade to the sound system.  Most of the main loudspeakers were blown and the overall system operation was complicated.  With a short timeline, a new loudspeaker was needed to provide sound for the entire stadium while simplifying the operation.  Prior to our involvement, users needed access to an amplifier closet where they had to manually turn on a rack full of amplifiers.

Using EASE focus, we verified that using the existing poles would cover the stadium as intended.  Adding a Furman sequencer system with a remote power switch in the press box allowed for powering the downstairs amplifier rack from within the press box.

The new loudspeaker system provides high-level, intelligible sound for the entire stadium.  Both the stands and field are covered and the processing built into the amplifiers provide protection for overdriving the system. 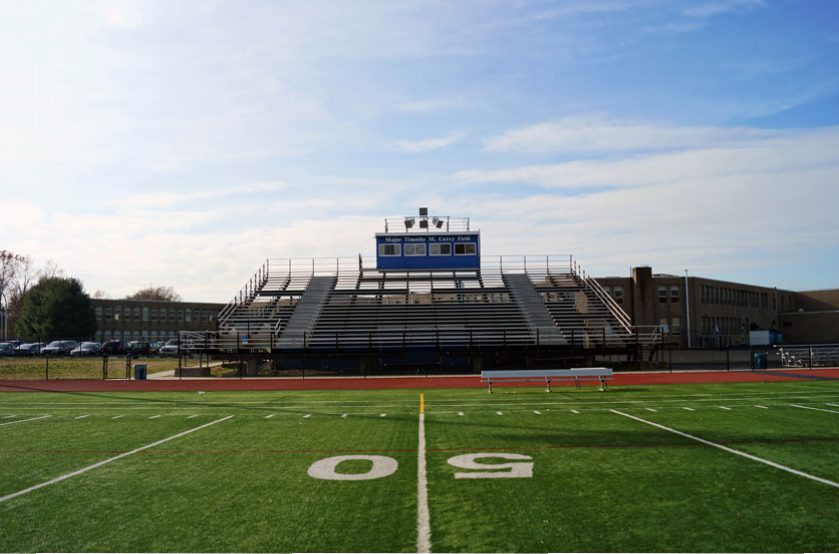 The Paul VI High School stadium did not have a permanently installed sound system, so for games, they set up portable loudspeakers.  They needed a permanent system that would cover the home stands, field, and visitor’s stands, all from the press box, as mounting on the poles would require breaking concrete and trenching.

Using EASE, an acoustical sound system modeling program, we created a 3D model of the stadium and placed the proposed loudspeakers on the press box.  After some aiming and tweaking, we were happy with the coverage and the system was approved and ordered.

With the R2s, we have great pattern control, exceptional low-frequency response and plenty of headroom which allows the system to be clear over crowd noise.

The new stadium sound provides exceptional speech and music reinforcement and covers the entire stadium.  Announcements are clear over the crown noise, and music has a full-range sound. 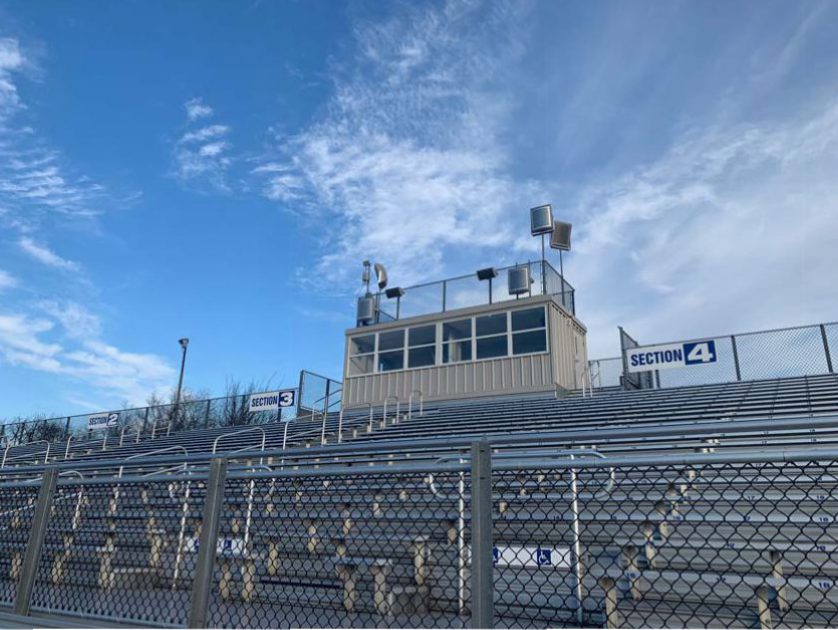 The Passiac County Technical Institute was in need of a new stadium sound system which could be used for gym classes, pep rallies, and football games.  The existing system was poorly designed and did not perform well.  This required a portable system for events, which was a hassle to set up and didn’t provide enough coverage or level.

The system had to provide high-level sound for the entire stadium without using the light poles as a mounting point.  Since we were limited to the press box only, we chose Danely Sound Lab’s OS80s for the main left, right and center loudspeakers.  The field coverage, center loudspeaker was mounted on the corner to keep the line of sight clear on the press box roof.  Two outdoor Danley GO2CX cabinets provide sound for guests in front of the press box.  To provide additional low-frequency, two Danely OS115s were mounted to the front of the pressbox fence.

The new sound system has been well received as it is simple to use with flexible modes and provides outstanding sound quality for the entire stadium. 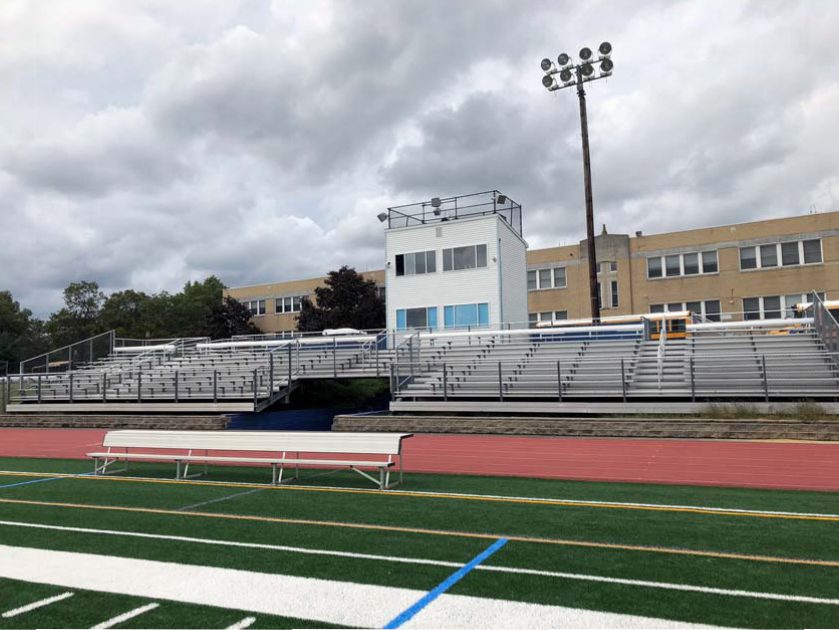 Donovan Catholic High School needed a new outdoor sound system for their stadium.  The old system was comprised of 30-year old horns and a small amplifier.

We utilized Community Loudspeakers R-series which are powerful outdoor models.  Four loudspeakers on the pressbox cover the entire stadium with clear, high-quality audio.  Crown amplifiers power the loudspeakers with a Rane HAL processor which provide simple controls for adjusting the system levels.  A single power button controller the Furman sequencer for powering the system on and off.

The new stadium sound system provides fans and athletes intelligible sound, regardless of the even, or weather. 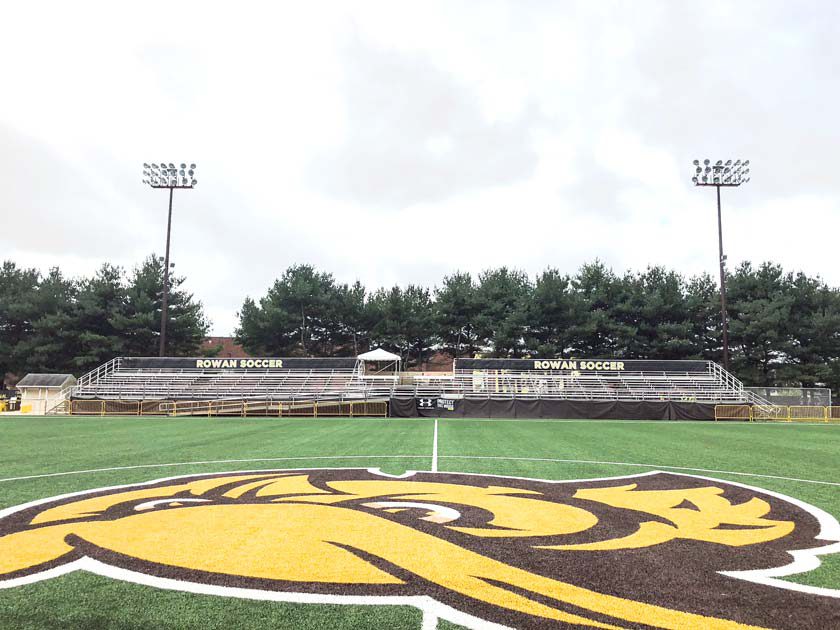 The Rowan University soccer stadium was using a portable sound system for practices and games which required staff to wheel out large cases and run power and audio lines.  Aside from the task of doing this, the coverage and quality of the system were poor.  A new, permanent outdoor sound system was needed to provide sound for the entire stadium with simple controls.

Using EASE Focus, we created a model of the stadium to predict the performance of the proposed sound system.  We utilized Community’s R.5MAX series which provide exception speech and music reinforcement in a compact cabinet.  Utilizing Polar Focus mounts, we installed them on the main light poles to provide coverage for the field and bleachers.

(4) Community R.5MAX Loudspeakers for the Field and Bleachers

The new sound provides outstanding speech and music reinforcement for the bleachers and field. 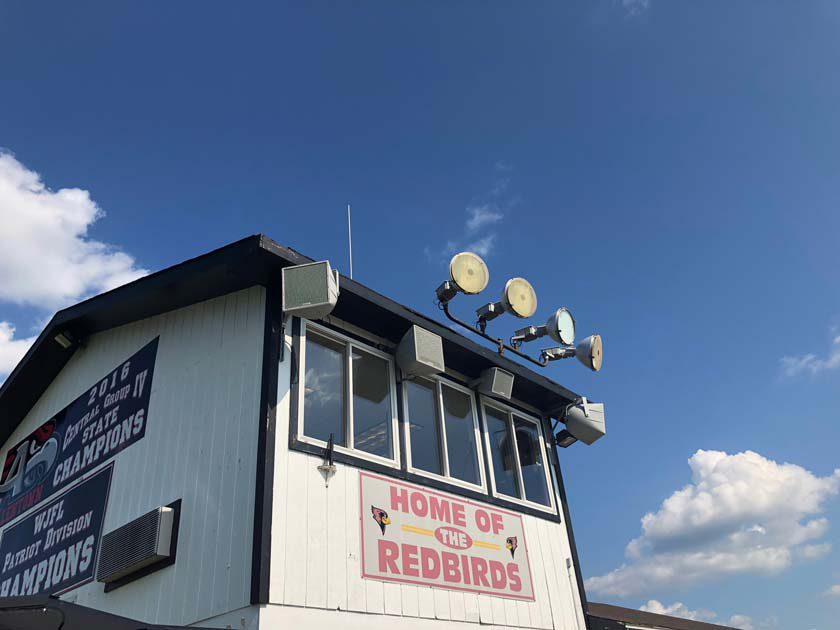 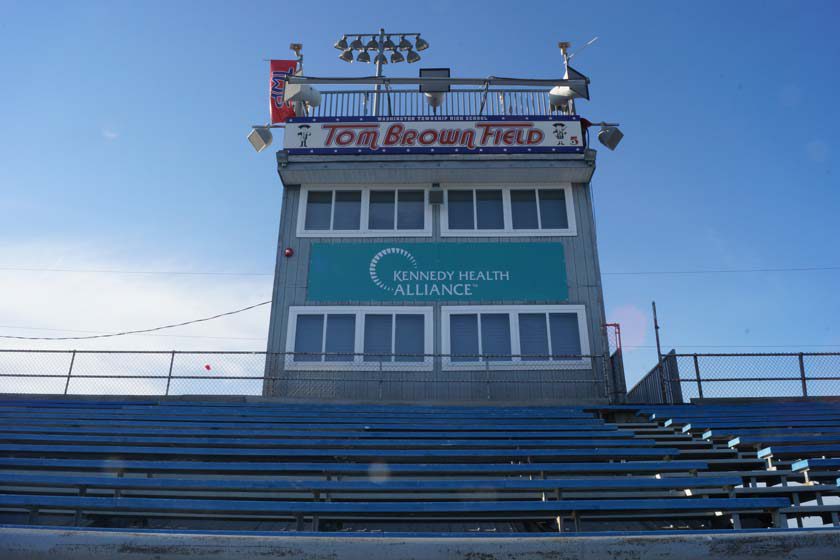 We installed new drivers in the existing Community R1 loudspeakers, re-mounted and aimed them for better coverage and added three additional cabinets to provide better coverage on the bleachers.  A new rack provides a secure location for the new equipment and a single power button with simple Symetrix wall controls provides a simple way to power the system on and off and control the levels.